CONVPHOT (De Santis et al. 2007) is a C code developed at INAF‐OAR that can compute background for each source and subtract it on-the-fly. The convolution is performed via straight pixel-­‐by-­‐pixel summation. Cutouts, templates, and also segmentations for each object can be stored as FITS files (requiring a large amount of memory), but the code may be run without storing images. Its only pre‐ requirement is the CFTISIO library. 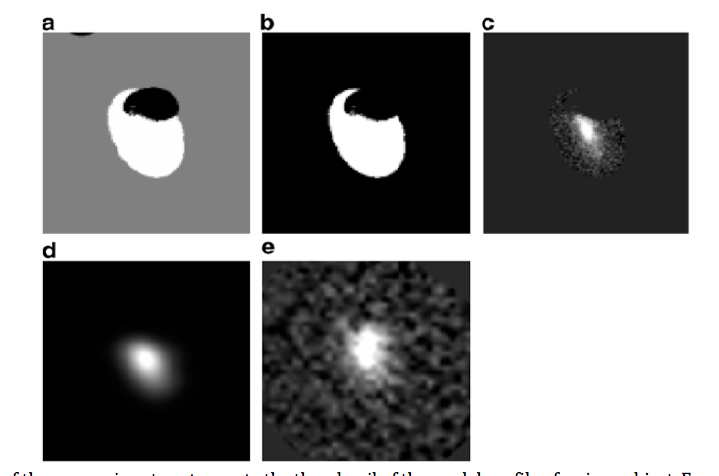 Example of the processing steps to create the thumbnail of the model profile of a given object. From left to right: (a) the segmentation of the object (white) is extracted, (b) other objects are masked, (c) the object profile is extracted from the detection image and the local background is subtracted, (d) the object profile is smoothed to the measure PSF and normalised to obtain the model profile and (e) the same object is extracted from the measure image subtracting its local background. (from De Santis et al. 2006)

The minimization procedure is performed on the LRI as a whole at once. This has the obvious advantage of being fully self‐consistent, excluding the introduction of possible arbitrary biases. On the other hand, if the LRI is large the method is highly demanding both in terms of RAM memory and of computational time. Indeed, the total computational time is comparable to the TFIT one, but in CONVPHOT most of the time is spent in the fitting routine, another source of slowness being the pixel‐by‐pixel convolution instead of the FFT one.

Outputs include fluxes, errors and diagnostic images, as for TFIT.
CONVPHOT does not include a double‐pass procedure with registered kernels. On the other hand, it allows for the possibility of fitting each source using only the pixels with fluxes above a relative threshold ti = Pi,MAX * tf, where Pi,MAX is the normalized model profile maximum of the i‐th object, and tf is an input threshold parameter. This should avoid spurious fits caused by the wings of the PSF.
Moreover, CONVPHOT allows for the iterative exclusion of sources with resulting strong (say, more than 3σ) negative flux, ruling them out after a first fitting pass and repeating the whole procedure without taking them into consideration.