The Frontier Fields survey is a pioneering observational program aimed at collecting photometric data, both from space (Hubble Space Telescope and Spitzer Space Telescope) and from ground-based facilities (VLT Hawk-I), for six deep fields pointing at clusters of galaxies and six nearby deep parallel fields, in a wide range of pass-bands. The analysis of such data is a natural outcome of the Astrodeep project, that focuses on developing methods and tools for extragalactic photometry and create valuable public photometric catalogues.

We present complete multi-wavelength photometric catalogues (from B band to 4.5 µm) for the first two of the Frontier Fields, Abell-2744 (A2744 hereafter) and MACS-J0416 (M0416), plus their parallel fields.

A2744 and M0416 image datasets are the first 2 publicly released of a total of 6 twin fields, observed by HST in parallel (i.e. the cluster pointing together with a “blank” parallel pointing) over two epochs, to a final depth of 140 orbits per field (FF program 13495, P.I. Lotz).

Additional information redward of WFC3 H160 band is a fundamental ingredient for selecting and investigating extragalactic sources across a wide redshift range. We use the publicly released Hawk-I@VLT Ks  images of the A2744 and M0416 fields (P.I. Brammer, ESO Programme 092.A-0472 3 ), resampled to the HST pixel scale. Finally, we include IRAC 3.6 and 4.5 µm data acquired under DD time and, in the case of M0416, Cycle-8 program iCLASH (80168, P.I. Capak).

In the following Table we list Point Spread Function (PSF) FWHM and depths of all the imaging data used. 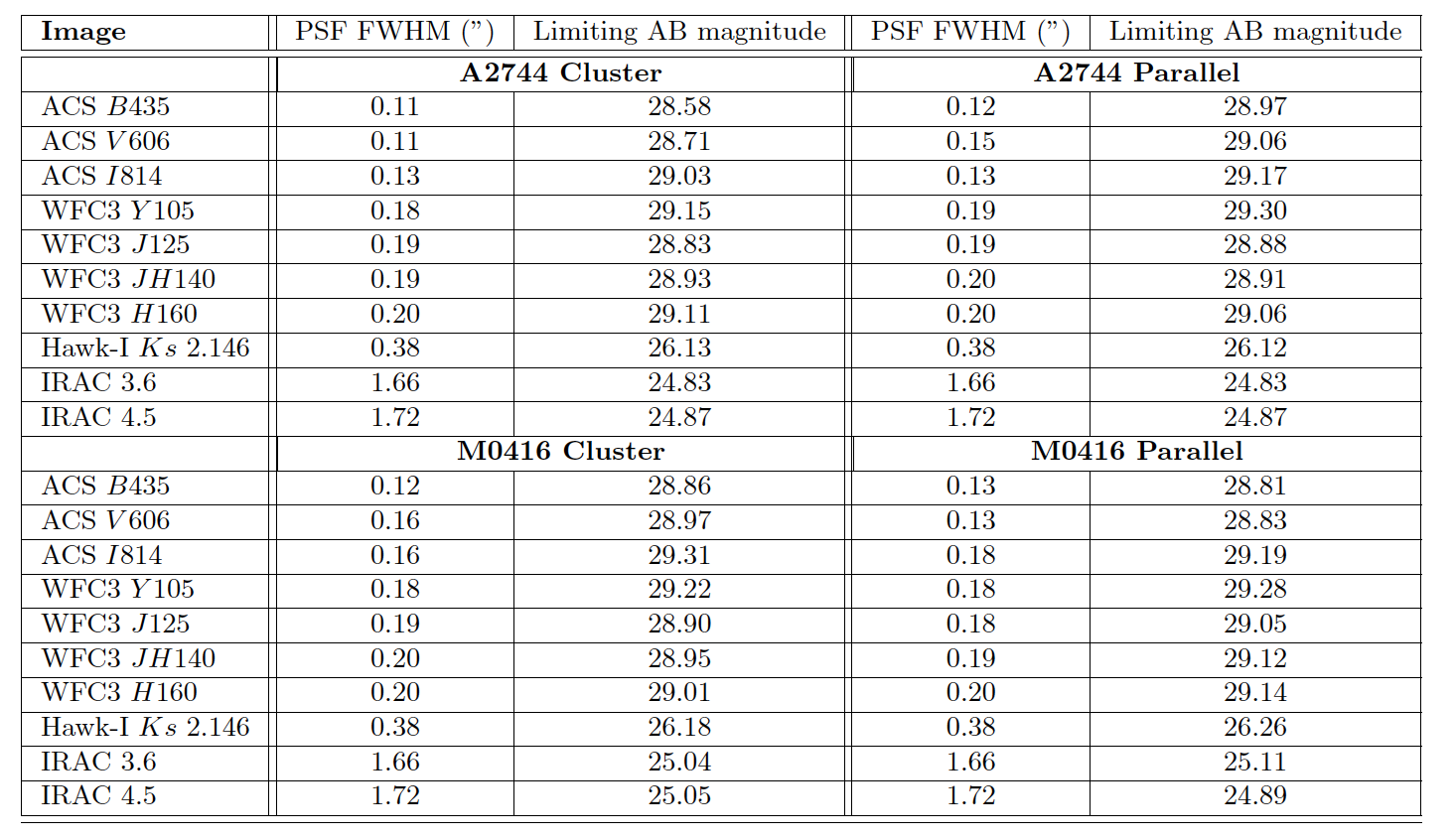 PSF FWHM and depths of the dataset we used.

To detect faint sources even in the central regions of the clusters, we develop a robust and repeatable procedure that uses the public software Galapagos (Barden et al. 2009) and Galfit (Peng et al. 2010) to model and remove most of the light contribution from both the brightest cluster members as well as the Intra-cluster Light (ICL hereafter; the procedure is sketched in the following flowchart, and the result of its application is displayed in the subsequent Figure: 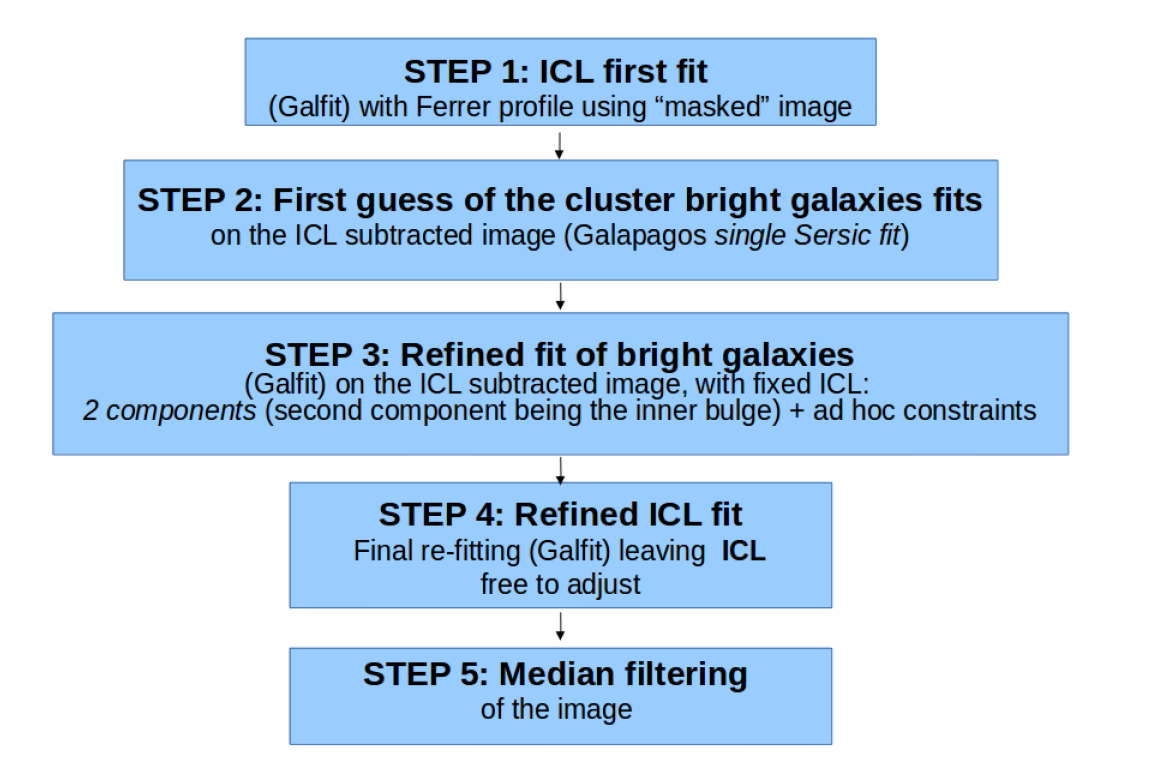 Schematic description of the procedure applied to “clean” the cluster images removing the light from the foreground bright sources. 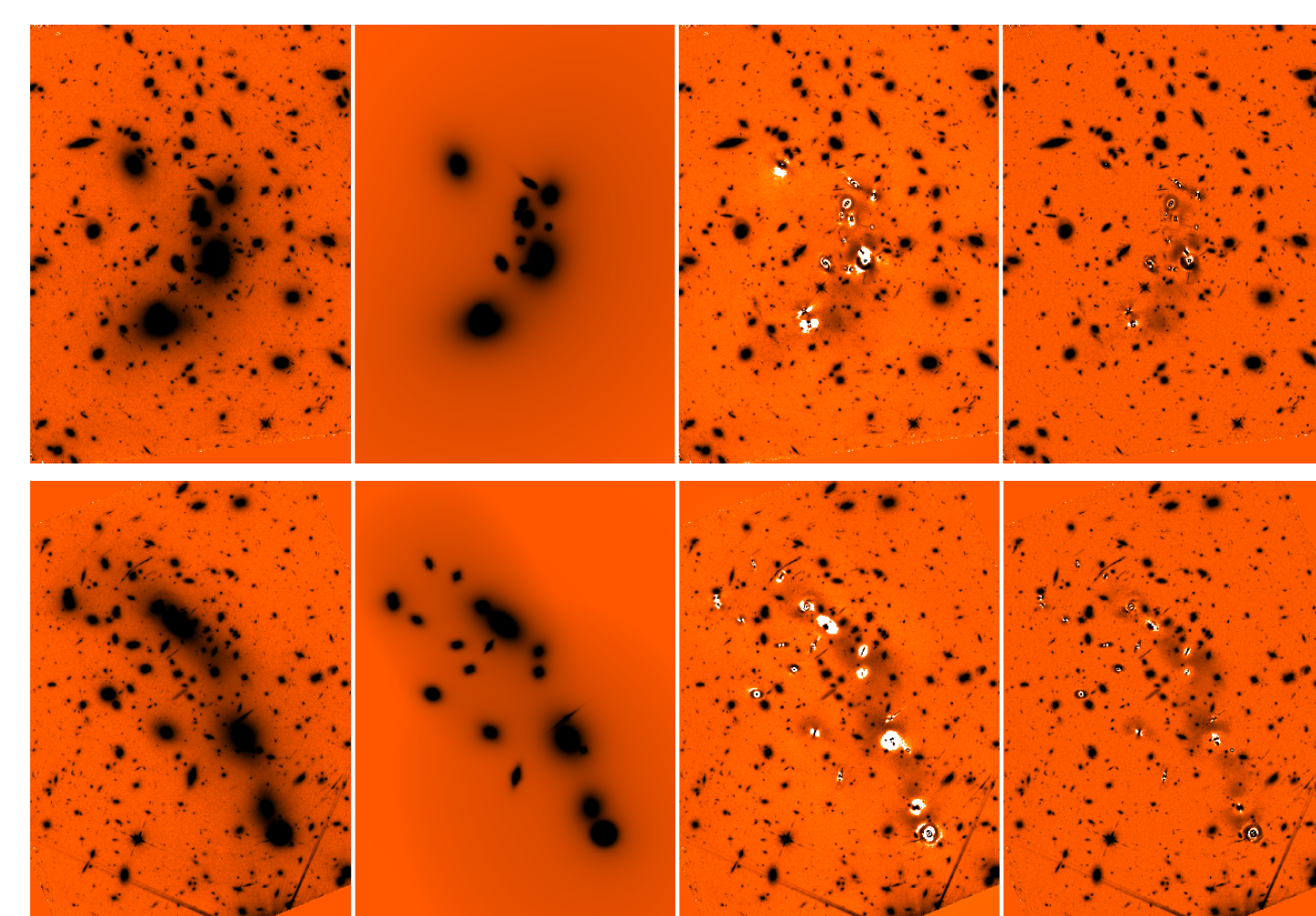 Effects of the procedure on the A2744 (top) and M0416 (bottom) H160 image. Left to right: original image, models of galaxies and ICL after STEP4, processed image after subtraction of the models, final processed image after median filtering (STEP5). All images have logarithmic grey-scale with the same cuts.

On the residual images, we perform the detection on the HST H160 image to obtain a pure H-selected sample. We also add a sample of sources which are undetected in the H160 image but appear on a stacked infrared image (Y+J+JH+H).

Photometry in the other HST bands has been obtained using SExtractor (Bertin et al. 1996) aperture photometry, performed again on processed images after the procedure for foreground light removal. Photometry on the Hawk-I and IRAC bands has been obtained using our PSF-matching deconfusion code T-PHOT (Merlin et al. 2015). T-PHOT uses the spatial and morphological information from a high-resolution image as priors to construct low-resolution normalised models. The code allows to fit real sources together with analytical models, therefore we can simultaneously fit faint sources with models of the bright cluster members. The residuals after T-PHOT fitting are displayed in the following Figure. 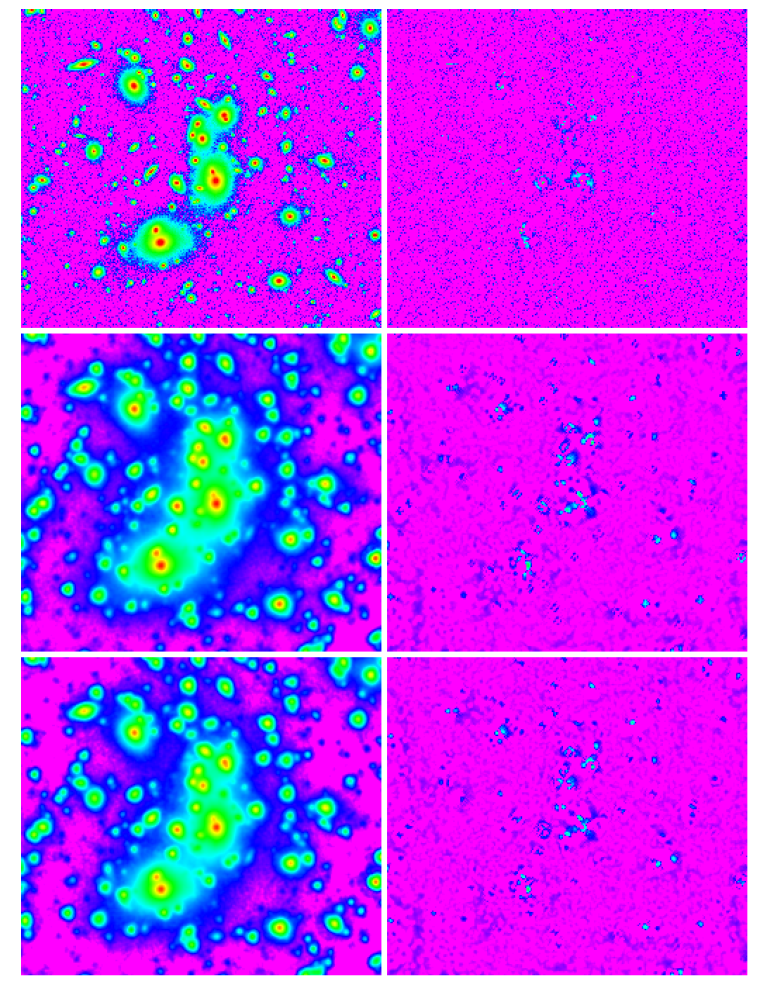 A2744 residuals after T-PHOT processing. Left to right, top to bottom: original and residual images of K, IRAC-ch1 and IRAC-ch2 (logarithmic scale).

A similar strategy, but without the need for the foreground light removal, is adopted for the Parallel fields.

The procedure for foreground light subtraction allows for the detection and the photometric measurements of  ~2500 sources per field. All objects have multi-wavelength coverage including B to H HST bands, plus K from Hawk-I, and 3.6 – 4.5 µm from Spitzer. Full and detailed treatment of photometric errors is included. We perform basic sanity checks on the reliability of our results. Our procedures allow for the detection of outshined objects near the bright galaxies, almost doubling the number of detected sources with respect to a standard detection procedure. This, coupled with the magnification effect of the clusters, can reveal extremely faint high redshift sources.

The light-removal procedure and the multi-wavelength photometric catalogues are described in detail in Merlin et al. (2016). The catalogues are publicly available (here) and are ready to be used for scientific purposes.

The OAR photometric redshifts are obtained with our zphot.exe code following the well-tested procedure described in Fontana et al. (2000) and Grazian et al. (2006). Best fit photo-z‘s are obtained through a χ2  minimisation over the observed HST+IR bands using SED templates from PEGASE  2.0 (Fioc & Rocca-Volmerange 1997) at 0.0< z< 10.0.

The Parsa  and Mortlock  runs both use the publicly available Le Phare code (Arnouts et al. 1999), and employ the PEGASE and zCOSMOS (Ilbert et al. 2006) template sets respectively. The Marmol-Queralto runs both utilise the publicly available EAZY  code (Brammer et al. 2008) and employ the PCA (built following Blanton & Roweis 2007) and PEGASE  template sets respectively. The McLure run is based on his own proprietary code, as described in McLure et al. (2011), which employs Bruzual & Charlot (2003) templates. All of the photometric redshift runs with the exception of the OAR one applied adjustments to the photometric zeropoints and the McLure, Parsa and Mortlock runs included strong nebular emission lines in the SED fits. To minimise systematics due to the use of a single approach we set as reference photo-z for each object the median value from the six available estimates.

Their reliability is assessed through a comparison with available spectroscopic samples. Publicly available lensing models are used to derive magnification values on an object-by-object basis by taking into account sources positions and redshifts. The released catalogues aim at providing a reference for future investigations of the extragalactic populations in these legacy fields: from lensed high-redshift galaxies to cluster members themselves.

The median photo-z‘s reach a remarkable 3-5% accuracy. After accounting for magnification the H band number counts are found in agreement at bright magnitudes with number counts from the CANDELS fields, while extending the presently available samples to galaxies intrinsically as faint as H160∼32-33 mag, thanks to strong gravitational lensing. The Frontier Fields allow to probe the galaxy stellar mass distribution at 0.5-1.5 dex lower masses, depending on magnification, with respect to extragalactic wide fields, including sources at M*=10^7-10^8M at z>5. Similarly, they allow the detection of objects with intrinsic SFRs >1dex lower than in the CANDELS fields reaching 0.1-1 Msun/yr at z∼6-10.

The photometric redshift catalogues and derived quantities are described in detail in Castellano et al. (2016), are publicly released and can be downloaded here. 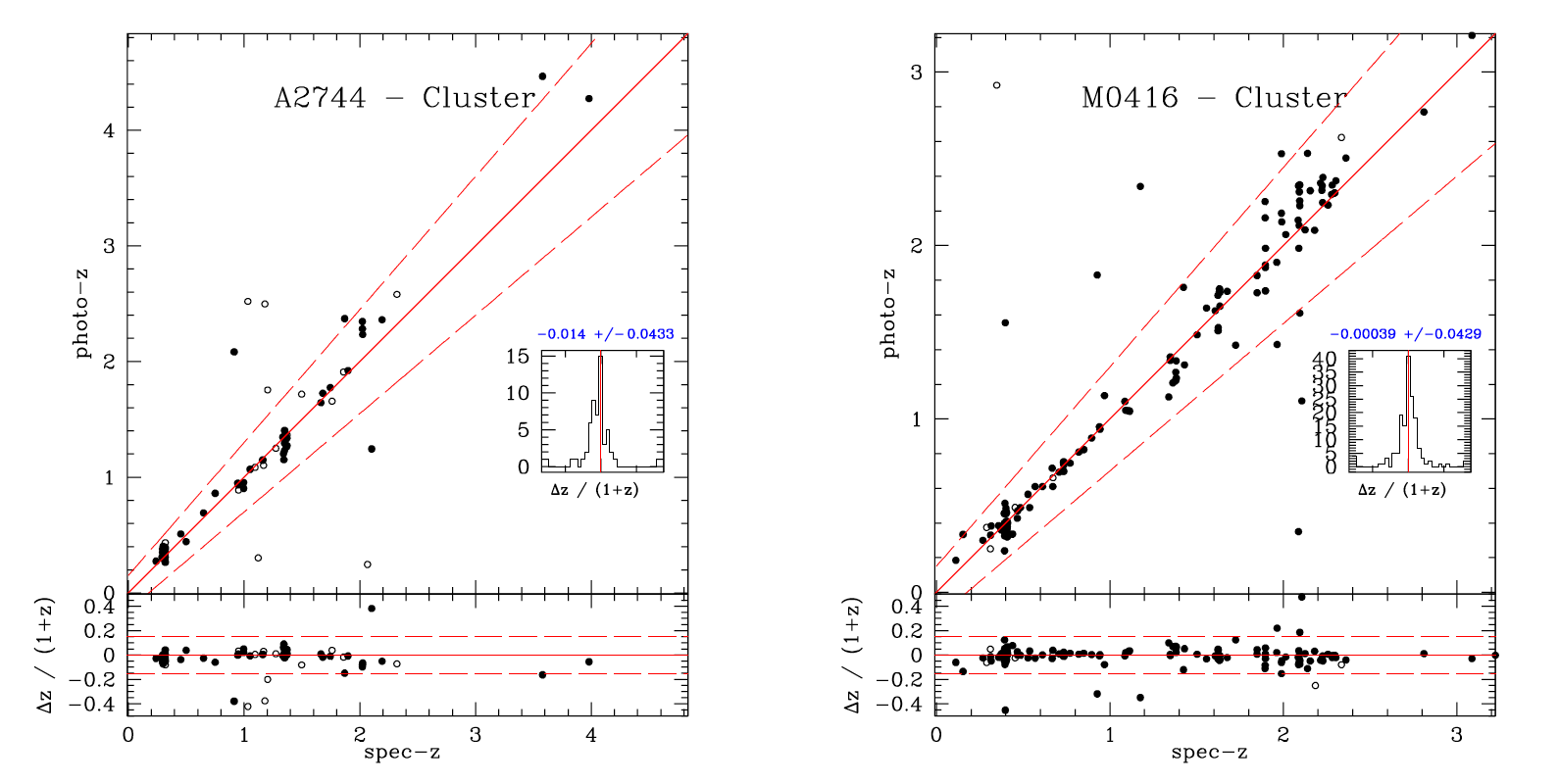 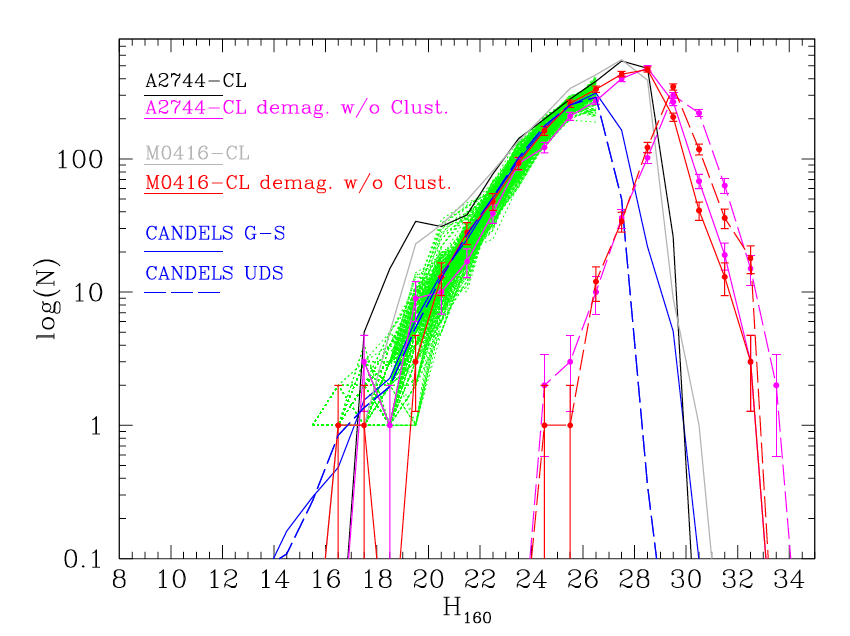 Demagnified H160 number counts in the cluster fields. Magenta and red continuous curves refer to A2744 and M0416 H-detected sources respectively after excluding all objects with photo-z consistent with the redshift of the clusters. Magenta and red dashed lines show the demagnified number counts of additional IR-detected sources (with S/N(H160)>1) in each field. As a comparison, number counts normalized to the FF area from the public CANDELS GOODS-South (Guo et al. 2013) and UDS (Galametz et al. 2013) catalogues are shown as continuous and dashed blue lines respectively. The green lines are number counts from randomly chosen portions of the CANDELS GOODS-South and UDS field having the same area as the FF pointings. 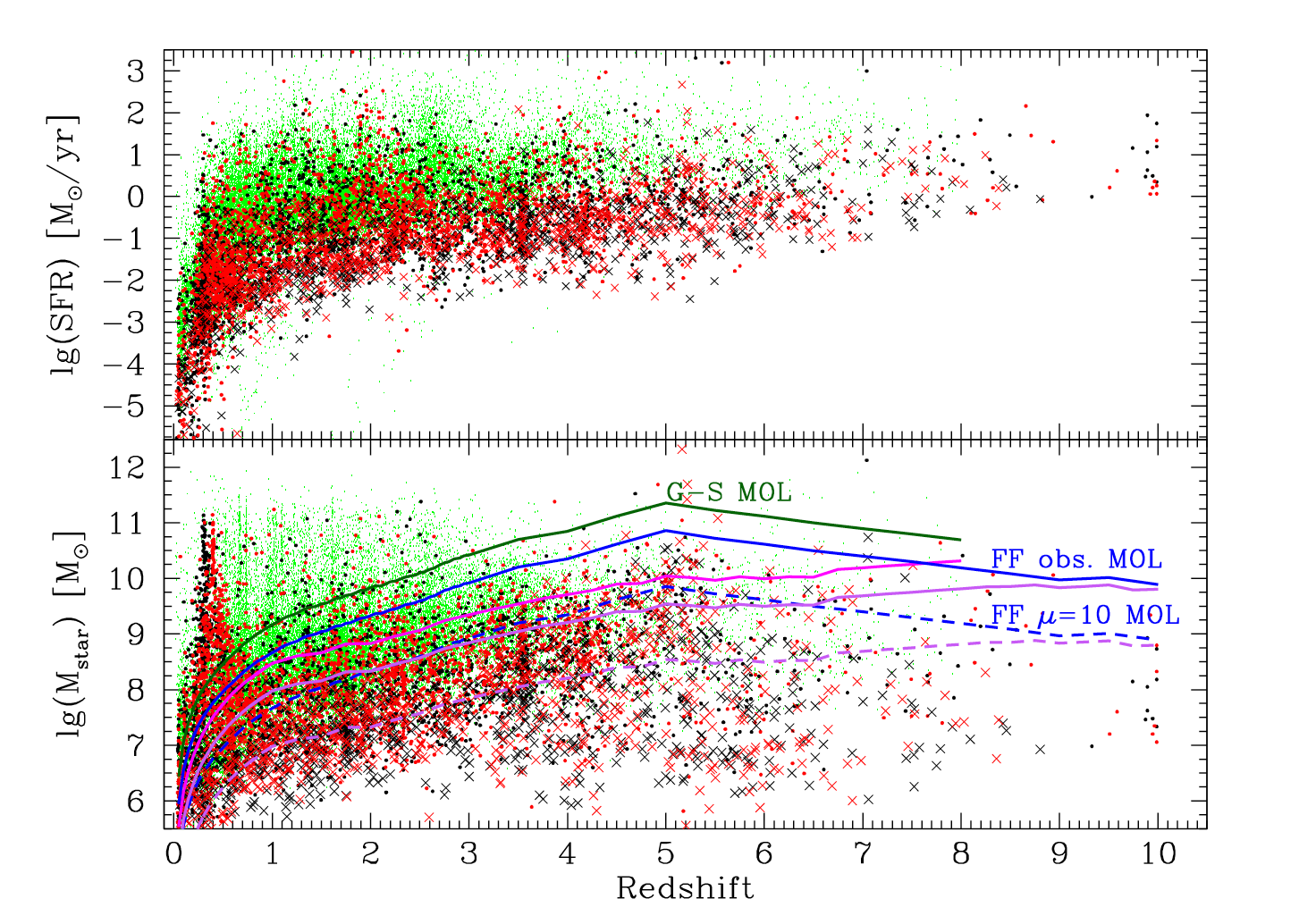 Top panel: Demagnified SFR as a function of redshift in the A2744 (black) and M0416 (red) clusters. Filled circles and crosses refer to H-detected and IR-detected sources respectively. For reference SFRs of objects from the CANDELS GOODS-South field are shown as green dots. Bottom panel: demagnified stellar masses, same symbols as above. The continuous and dashed blue lines show the limiting Mstar for a “maximally old model” at H160=27.25 (observed 90% completeness limit) and H160=29.75 (90% completeness limit for =10). The continuous and dashed lines show the corresponding “completeness corrected” limiting Mstar (see text for details). The dark green and magenta continuous lines show the “maximally old” and completeness corrected limiting Mstar of CANDELS GOODS-South from Grazian et al. (2015).

In the following links you may find all catalogs produced by the Astrodeep collaboration.

A detailed description of the four catalogs contained in each tar file including column information can be found here.